Markets and the real economy continued their year-long honeymoon during the period under review, which started in early September. Amid further synchronised strength in advanced economies (AEs), mostly solid growth in emerging market economies (EMEs) and, last but not least, a general lack of inflationary pressures, global asset markets added to their year-to-date stellar performance while volatility stayed low. This "Goldilocks" environment easily saw off the impact of two devastating hurricanes in the United States, a number of geopolitical threats, and further steps taken by some of the major central banks towards a gradual removal of monetary accommodation.
Central banks' actions, on balance, reassured markets. Their varied moves reflected their different positions in the policy cycle. Following its September meeting, the Federal Open Market Committee (FOMC) announced that it would initiate its balance sheet normalisation programme in October, after careful and prolonged communication with markets about strategies and approaches. After 10 years on the sidelines, the Bank of England at its November meeting raised its policy rate by 25 basis points to 0.50%, while keeping the bond purchasing programmes unchanged - which market participants described as a "dovish hike". In October, the ECB extended the Asset Purchase Programme (APP) at least until September 2018 while halving the monthly purchases, starting in January 2018. The central bank also confirmed that it would stand ready to expand the APP again if macroeconomic conditions deteriorated. The Bank of Japan kept its policy stance unchanged.
Even as the Federal Reserve implemented its gradual removal of monetary accommodation, financial conditions paradoxically eased further in the United States and globally. Only exchange rates visibly priced in the Fed's relatively tighter stance and outlook, which helped stop and partially reverse the dollar's year-long slide.
As long-term yields remained extremely low, valuations across asset classes and jurisdictions stayed stretched, though to different degrees. Near-term implied volatility continued to probe new historical lows, while investors and commentators wondered when and how this calm would come to an end. Ultimately, the fate of nearly all asset classes appeared to hinge on the evolution of government bond yields. 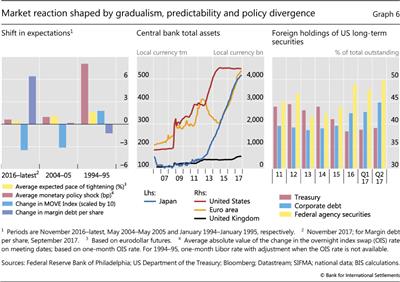 Popular posts from this blog

December 14, 2017
Fitch Ratings-New York-11 December 2017: The total amount of global negative-yielding sovereign debt remains at elevated levels despite the European Central Bank's (ECB) plan to reduce monthly asset purchases amid improving economic fundamentals in the Eurozone, according to Fitch Ratings. As of Dec. 4, 2017, there was $9.7 trillion of negative-yielding sovereign debt outstanding, up from $9.5 trillion on May 31, 2017 and $9.3 trillion one year ago. Fonte: Fitch: $9.7T of Neg Yielding Debt Despite Monetary Normalization
Post a Comment
Read more

“If you put the federal government in charge of the Sahara Desert, in 5 years there'd be a shortage of sand.” – Milton Friedman

"Those who would give up essential Liberty, to purchase a little temporary Safety, deserve neither Liberty nor Safety." - Benjamin Franklin

The content is offered by the author with the sole informative purpose; moreover it is exposed without any guarantee and it does not constitute any form of investment advice. Any action undertaken by the reader on the basis of the content, analysis or opinion is intended to be under the sole responsibility of the reader.

For omissions, mistakes or copyrighted material you are kindly pleased to inform the author by writing to info.emerginginvest@google.com