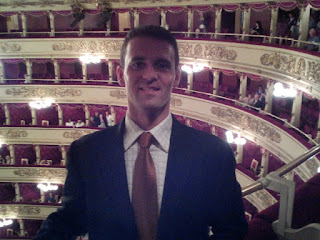 I am an Italian 1.Economist that is 2.Catholic 3.Conservative Libertarian 4.pro-Market Economy 5.Classical-Keynesian 6.pseudo-Mercantilist 7.euro-pragmatic and disillusioned 8.pro UK-Italy-US 9.pro-cooperation with Russia 10.strategically protectionist for the core national industrial system.

I am completing a PhD in Economics (Dr.rer.pol.) in Switzerland, on the “classical-Keynesian” school of thought.
The research is focused on the functioning of the international monetary and financial system, therefore on the commercial unbalances and the credit-based fiat reserve currencies, under a fractional reserve banking system. The reform proposal concerns the introduction of a correction system for the commercial unbalances firstly proposed by JM Keynes – the “International Clearing Union” – and one or two international reserve currencies that would be convertible into real assets such as gold or other tangible goods. This for avoiding the monetary inflation due to the creation of the fiat currency, with the consequent manipulation of the exchange rates that impact on the distortions of the commercial unbalances between productive economies and the non competitive ones. – This model may be applied eventually to a cryptocurrency that may not be inflated because available in a predefined limited amount. I expect a rapid diffusion of the employment of the blockchain in the modern payment system under development, in the course of the next decade.

I expect a capital inflow into the southern periphery of the eurozone, therefore raising the need for macroeconomic and financial consulting, namely to provide macroeconomic analysis also to support the inflow of financial capital into the southern periphery of the eurozone from the other currency areas, that would be seeking a safe haven into the eurozone for parking liquidity in a foreign investment – such as the beautiful central Italy – from abroad.

Notwithstanding the innate propensity to start a business project – possibly in Venezuela – the excessive monetary expansion and lending of credit in the aftermath of the introduction of the euro in 2002 have been causing a wide inflation of the market value of assets therefore an excessively onerous investment costs. The extremely low interest rates have favoured in the years the accumulation of unproductive debt and blowing an unsustainable real estate bubble, dependent on the lending rather than on the effective capacity to generate income through production and the export of goods and services.

Indeed, quod erat demonstrandum, the ultraexpansionary monetary policies adopted in the aftermath of the global financial crisis of 2008-9 have revealed counterproductive if not detrimental in respect of the stability of the economic system, such as its productivity and international competitiveness. Supporting an economy in a debt deflation and demographic crisis by reducing the interest rates – and keeping rates at zero for a decade – thus expanding lending, other than monetizing the deteriorated financial assets, was revealed counterproductive. As it was widely foreseeable.

In fact I share the approach of the Austrian economist Schumpeter and his “creative destruction”, aspiring to a necessary normalization of the financial sector to sustainable levels by the real economy.

On my website lucabindi.com I presented my deductive* expectations on a possible evolution of the economic and financial system, concluding with the expectation for the next decade of a capital inflow into the eurozone eventually favouring the periphery of the eurozone such as the economy of Italy, similarly to what incurred during the years of the expansion of the financial cycle for the Italian economy since the early years of the euro adoption between 2002 and 2008.

*Deductive because I proceed from the analysis of the general functioning of the global financial system as a whole – essentially focusing on the commercial unbalances between debtor and creditor economies – to recognize the expected implications for the particular domestic economy of Italy.

During the course of my macroeconomic studies, I gradually became aware that a global market for trade allows an economy the accumulation of a structural surplus only when another economy may fund its consumption through foreign financing. This occurs especially in the case of an excessively undervalued currency for the first and an alarmingly overvalued one for the second, so that the former acquires additional competitiveness at the international level for its exportable manufacturing goods, while the second loses it.

It is my profound understanding that the accumulation of a remarkable commercial surplus is as embarrassing as the accumulation of a chronic commercial deficit. Especially for the distortions that this may cause in the global trade and in the allocation of production – therefore of investment and employment – globally. And I also feel uncomfortable for the accumulation of the Italian commercial credit that is mainly due to the adoption of unprecedented austerity measures for discouraging its domestic demand eventually for reducing the import of foreign goods.

With this I mean that as it is the creditor that lends a loan to the debtor, if the creditor lends an excessively destabilizing amount of credit to the debtor for funding its consumption of imported goods, then it is its own responsibility – rather than the sole responsibility of the debtor – to allow that the debtor generates an additional income, through the exportable manufactured goods, to be addressed to the creditor economy. Otherwise a structural current account surplus has more the makings of predatory finance, rather than of a fair international competition for a global and inclusive trade.

Indeed it is my profound conviction that it is the responsibility of the net exporter lender economy to support the recovery of its commercial partner, by adsorbing the export of the exportable manufactured goods of the importer borrower economy in order to rebalance its current account deficit. If this has to be undertaken by the adoption of an expansionary fiscal policy to raise the effective demand and imports or by a restrictive monetary policy to revalue the domestic currency of the creditor economy, it is not the aim of the writer to discuss this here.

«I am confident that the economy of the 2000-2100 century may be readdressed from speculation to stability, with the introduction of a stable international monetary standard»

Popular posts from this blog

Fitch Ratings-New York-11 December 2017: The total amount of global negative-yielding sovereign debt remains at elevated levels despite the European Central Bank's (ECB) plan to reduce monthly asset purchases amid improving economic fundamentals in the Eurozone, according to Fitch Ratings. As of Dec. 4, 2017, there was $9.7 trillion of negative-yielding sovereign debt outstanding, up from $9.5 trillion on May 31, 2017 and $9.3 trillion one year ago. Fonte: Fitch: $9.7T of Neg Yielding Debt Despite Monetary Normalization
Post a Comment
Read more

“If you put the federal government in charge of the Sahara Desert, in 5 years there'd be a shortage of sand.” – Milton Friedman

"Those who would give up essential Liberty, to purchase a little temporary Safety, deserve neither Liberty nor Safety." - Benjamin Franklin

The content is offered by the author with the sole informative purpose; moreover it is exposed without any guarantee and it does not constitute any form of investment advice. Any action undertaken by the reader on the basis of the content, analysis or opinion is intended to be under the sole responsibility of the reader.

For omissions, mistakes or copyrighted material you are kindly pleased to inform the author by writing to info.emerginginvest@google.com